29th Sunday in Ordinary Time (B) 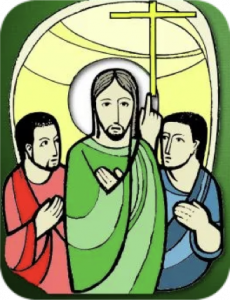 James and John, the sons of Zebedee, approached Jesus. ‘Master,’ they said to him ‘we want you to do us a favour.’

He said to them, ‘What is it you want me to do for you?’ They said to him, ‘Allow us to sit one at your right hand and the other at your left in your glory.’

‘You do not know what you are asking’ Jesus said to them. ‘Can you drink the cup that I must drink, or be baptised with the baptism with which I must be baptised?’

They replied, ‘We can.’ Jesus said to them, ‘The cup that I must drink you shall drink, and with the baptism with which I must be baptised you shall be baptised, but as for seats at my right hand or my left, these are not mine to grant; they belong to those to whom they have been allotted.’

When the other ten heard this they began to feel indignant with James and John, so Jesus called them to him and said to them, ‘You know that among the pagans their so-called rulers lord it over them, and their great men make their authority felt. This is not to happen among you. No; anyone who wants to become great among you must be your servant, and anyone who wants to be first among you must be slave to all. For the Son of Man himself did not come to be served but to serve, and to give his life as a ransom for many.’

Collect prayer: Almighty ever-living God, grant that we may always conform our will to yours and serve your majesty in sincerity of heart.

Saints of the Week

“Whoever wishes to be great among you will be your servant”

What need was there that the Son of God should suffer for us? There was great need: and indeed it can be assigned to two reasons. The first is that it was a remedy against sin, and the second is for an example of what we should do. (…) For the Passion of Christ can bring about a complete reformation of our lives. (…) If you seek an example of charity, then “no one has greater love than this, to lay down one’s life for one’s friends” (Jn 15:13). (…) If you seek an example of patience, you will find it in its highest degree on the cross. (…) Christ suffered greatly upon the cross and with all patience, because “when he was insulted, he returned no insult” (1 Pt 2:23), “like a lamb led to the slaughter, he opened not his mouth” (Is 53:7). (…) “Let us persevere in running the race that lies before us while keeping our eyes fixed on Jesus, the leader and perfecter of faith. For the sake of the joy that lay before him he endured the cross, despising its shame” (Heb 12:1-2).

If you seek an example of humility, look upon him who is crucified; although he was God, he chose to be judged by Pontius Pilate and put to death. (…) If you seek an example of obedience, imitate him who was obedient to the Father “even to death” (Phil 2:8). “For just as through the disobedience of one person, Adam, the many were made sinners, so through the obedience of one the many will be made righteous” (Rom 5:19). (…) If you seek an example of contempt for earthly things, imitate him who is “King of kings and Lord of lords” (1 Tm 6:15), “in whom are hidden all the treasures of wisdom and knowledge” (Col 2:3). On the cross he was stripped naked, ridiculed, spat upon, bruised, crowned with thorns, given to drink of vinegar and gall.
(Cf. Saint Thomas Aquinas, On the Apostle’s Creed). 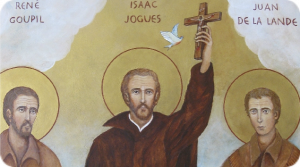 Among the most gifted men of the 17th century were Isaac Jogues, John de Brébeuf, Gabriel Lalemant, Noel Chabanel, Charles Garnier, Anthony Daniel, Rene Goupil, and John de Lalande. The first six were Jesuits, the latter two, laymen. Soon after taking her vows, Teresa became gravely ill, and her condition was aggravated by the inadequate medical help she received; she never fully recovered her health. She began receiving visions, and was examined by Dominicans and Jesuits, including Saint Francis Borgia, who pronounced the visions to be holy and true.

By 1632, the Jesuits had a mission centre in Quebec, where they ministered to 20,000 Huron in 30 villages. The missionaries suffered from cold and heat and were not accustomed to the Huron culture. When the “black robes” arrived, Huron children ran to their mothers, afraid that they were sorcerers. The missionaries were blamed for a smallpox epidemic. Still, they tried to bring the faith to the native people, educate them, and teach them medical and agricultural skills. John de Brébeuf founded schools and wrote a catechism and dictionary in the Huron language. He was once condemned to death but spoke so well that he was spared. Noel Chabanel, a language professor, could barely stutter out Huron phrases. The food and life of the Huron repulsed him, but he vowed to stay. Rene Goupil and John de Lalande, lay missioners, worked without pay. Charles Garnier sometimes walked 40 miles to baptize one child.

The missionaries converted about two thousand converts in their many years in Quebec. Then the enemies of the Huron, the Iroquois, who resented the French, captured and tortured the missionaries. Rene Goupil was tomahawked while trying to baptize a baby. Anthony Daniel was at Mass when the Iroquois attacked, shot arrows at him, and threw him into the fire. Isaac Jogues was made a slave but escaped back to France. His left hand had been mutilated, but Pope Urban VIII allowed him to celebrate Mass, saying, “It would be a shame that a martyr of Christ not drink the blood of Christ.” Isaac Jogues returned to America. On a peace mission to the Iroquois for the governor of New France, he was accused of bringing a bad harvest. The Iroquois thought his box of religious goods contained the plague. He was attacked and killed. The Indian who killed him was later baptized and took the name Isaac. The sufferings of the missionaries are the seeds of the Church.
(Source: www.loyolapress.com)

By bringing non-perishable food, and first need items you can help those in need. You may drop off your donation at the church or the Priests house.

This growing apostolate always needs volunteers, for information, please, contact Richard (99282385) or Fr. Fernando. Thank you for your prayers and support!

During the Sunday Masses of next week (23 and 24 october), we will hold a retiring collection for the Missions of the Church.

Feast of Our Lady, Queen of Palestine (Patroness of the L. P. of Jerusalem)

We will celebrate the feast of Our Patroness during the Masses of the last Sunday of the month (30 and 31 October).

There are poppies in the coffee shop. There is a Mezze at the Windmill Thursday 21st October 1.30 pm to support veterans and their families living in Cyprus. If you would like to come €25 per person including first drink contact Fr. Jim (997983169).

As we return to more normal ways we have resumed having a weekly retiring collection for Archangel Michael Hospice. It is the Parish contribution to the Hospice. You will find the basket with a sign on the way out, if not being held by someone. Thank you!

We remind you that since May the Shop has moved next to St Paul’s Tavern. Books, clothes, bric-a-brac, tea and coffee all available. You can bring your donations to the shop from Sunday to Friday. We also need volunteers to help run the Shop. Please contact Ruth (97672251).